Very, very few startups turn a profit the first year. And, according to statistics, most fail altogether within five years. As a new entrepreneur, you’ll hear “entrepreneurial secrets” every step of the way. But, the big secret is: How to be an entrepreneur who actually turns a profit? And, that’s where 20-something Alejandra Viana of Leg Candy Apparel comes into play. This young entrepreneur made $50,000 during her very first year in business. Here’s how!

Alejandra Viana Shares Her Secret to Turning a Profit 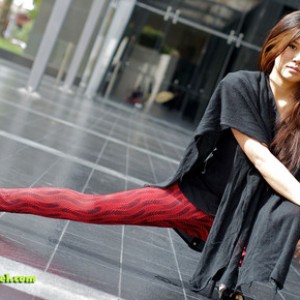 It all starts with a good idea… Back in 2009, Alejandra Viana took a trip to Hong Kong, where the printed leggings trend was in full-swing. When she returned to the US, she realized this trend hadn’t hit the American scene yet. She saw this as a lucrative business opportunity and ran with it.

“When I told my mom my idea, she said ‘I’ll fund you, now go out and do your research.”

According to the then 20-year old go-getter, that was the easy part:

“My biggest challenge in the beginning was finding the right fabric.

People didn’t take me seriously. I walked all over LA with my swatches. I was 20 years old and I was trying to do business and I looked really young. Simple things like purchasing fabric and hiring contractors were difficult. They were skeptical when I would walk in.

I just kept going. Obstacles don’t dictate my life. I kept knocking on doors. I kept walking around LA, meeting new people and networking in the fashion district. I went to the LA Textile Show and talked to a lot of people. It took me almost a year before my first collection was produced.”

Alejandra Viana tried to get the word out about her brand everywhere she could think of… events, boutiques, booths, etc… She stayed active during that first year, networking and promoting her Leg Candy products.

“I would have an event or two booked every weekend, street fairs, boutiques, pop-ups, you know, just a set-up somewhere, anywhere, and everywhere I could give out my card and say, ‘Hey, let’s do something.'”

Alejandra says that many of her best connections came from other new entrepreneurs. She reached out to various models and struck up agreements with them. Having them model her gear was a great way to get the word out.

She’d even give away leggings so the recipients could tell their family and friends about them. Then, there were the networking events, which helped her meet fashion industry people. Later, those same people would invite young Alejandra to attend their events, where she’d have her own booth or table.